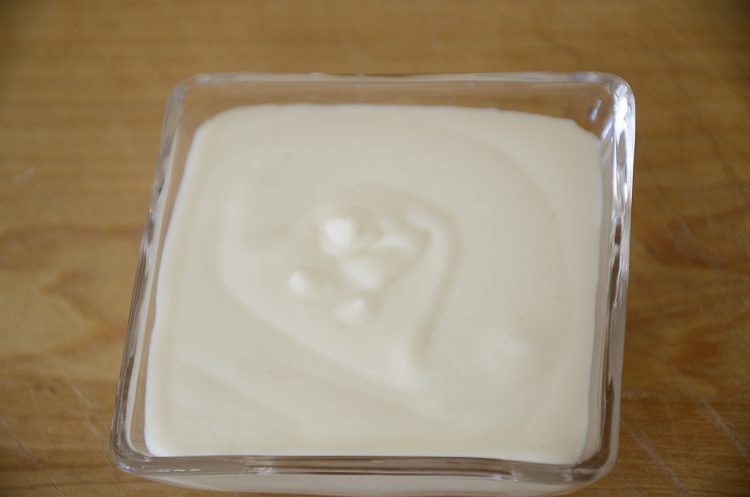 Commercial Sour Cream is consistent, pretty good and widely available so when would I make my own?

Recipes abound about how easy it is to make homemade sour cream in minutes with just 2 ingredients. I have had varied success (or failures) with some of the methods. I can share my experience and perhaps save you some effort, expense and frustration.

The first thing to watch for is – you cannot use UHT (Ultra High Temperature) dairy products. Those are the ones that you find in opaque containers that last for months and do not have to be refrigerated until they are opened. Read the cartons though – some brands in the dairy case can also be UHT. Especially check Natrel Fine Filtered milk and Organic Meadow since they are known for UHT pasteurization. These dairy products have been pasteurized at higher temperatures (minimum 280 F) to kill off pathogens and then they are packed without air contact, thus sterilizing the product. (Normal pasteurization is around 161 degrees F). UHT processing also kills off some benefical bacterial cultures that play a role in the fermenting process needed to make sour cream and other naturally thickened dairy products.

But – here is the kicker – you know how light cream and whipping cream have really longer expiration dates? Well – they have also been pasteurized at higher temperatures (although not given the full anaerobic treatment that would allow them to be stored at room temperature).

All this to say that with the pasteurization processes at work in our dairy cases – homemade sour cream can get a bit trickier than many articles would have you believe.

What Acids Are Best as Thickening Agents?

Buttermilk, lemon juce and white vinegar are the most traditional acidifiers recommended.

I had no success with Buttermilk as a thickening agent. I suspect that both the cream and the buttermilk were also almost sterile from having been processed at higher temperatures that killed off a lot of the bacterial culture.

Lemon juice and white vinegar were both much more reliable. Lemon juice leaves a hint of citrus in the finished product. White vinegar is tangier but a more neutral flavour. You could choose either depending on what you are using the sour cream for. You may not want to impart lemon flavour if you are planning to top a baked potato with it but in a dip, baked goods or a cheese cake it might not make any difference at all.

Apple Cider Vinegar with the mother is another acidifier that by design is full of helpful active culture. It will have a distinctive flavour from the vinegar so you would only use this where that flavour would be an asset.. like this Cream and Crumble Schnitz Pie.

The most successful thickening agent? Kefir! It is a fermented product so by nature it is full of good bacteria culture! Lemon juice and vinegar produce a slight tang and brightness but Kefir resulted in a very rich, flavourful sour/tanginess. This may not be desireable if you are baking a cheese cake but it would certainly be welcome in a Tzatziki or Ranch Dip.

What Type of Cream Should I Use?

The percentage of milkfat in your cream will largely determine the richness of your finished product. Richness is not an issue with homemade sour cream since any level of fresh cream tends to result in a richer feel than any commercial sour cream level.

Regular commercial sour cream runs at 14% MF while light is usually about 5% and then there is also no fat.

I diluted a combination of whipping cream (35%) and 10% cream to get about 15% milk fat. That fat content thickened nicely with lemon juice or vinegar. It was still a bit loose after 24 hours on the counter but thickened to a prefect consistency overnight in the fridge.

I had less success with milk fat content less than that. With 10% cream it took 48-72 hours to thicken and it separated into cream and whey. When I strained off the liquid I was left with less than a 1/4 cup of cream from the initial 1 cup of cream I was trying to thicken.

Some recipes suggest that you can use flour as a thickener but using 10% cream it took so much the end result was still runny and chalky and unappealing.

Other recipes suggest using gelatin to thicken. I thought that had promise but after several attempts using differing quantities of gelatin I could not get an acceptable texture or consistency. Most were solid gummy blocks. I guess there is a reason that commercial low fat sour cream has corn starch, cellulose gum plus 12 other ingredients!

So light sour cream is a no go for me so far….

The challenge with homemade sour cream tends to be getting the texture as thick as you want for your intended use.

With all the acidifiers the best method was to mix the cream and acidifier and leave it covered with cheesecloth or a tea towel (anything that breathes) for 24 hours on the counter at room temperature or a slightly warmer place like your oven with the light on.  It will not be as thick as commercial sour cream yet but once refrigerated for several hours it will thicken to a more familiar texture albeit looser than store bought sour cream.

If you are using the sour cream as an addition to a baking product, such as a quickbread, a looser consistency will not be an issue. You really just want the cream for liquid sake and the acid to soften the crumb.

However, if you are wanting it for a cheesecake addition or stand alone toppping where texture is important then you will want to approximate the commercially familiar consistency as closely as possible.

The ‘regular’ sour cream version ie about 15% milkfat thickened naturally to a good consistency after being refrigerated overnight. (It might have happened sometime during the night but I am not sure exactly when!)

But – if for some reason it has not reached the thickness you want you can strain the sour cream in a sieve lined with cheesecloth, in the fridge for a few hours. The longer you allow it to strain the thicker it will get.

Apple Cider Vinegar with the mother is a strong agent for thickening but there will be a noticeable taste. This can work for you if you are going to use it on an apple crumble or Schnitz Pie topping!

If you use cream above 20% you are now making Crème Fraîche, which is similar to sour cream but is distinguished by the higher fat content. Crème Fraîche is a good choice for creamy soups and sauces since it won’t curdle when you add it to hot liquid. It is also a good choice for dessert recipes due its richness.

How to Store Homemade Sour Cream?

Refrigerate after the initial culture period at room temperature. A plastic container like the commercial containers will reduce light and be airtight, which is what you are going for.

Always use very clean containers and utensils so you don’t introduce any foreign bacteria that could start to mold etc.

Refrigerated religiously you should get 7-10 days out of. If you see the water start to separate from the rest, drain it off and then use it up within the next day or so.

If you see mold, it has been contaminated and should be discarded.

Step By Step- How to Make Homemade Sour Cream Note 1: For regular sour cream:  Note 2:  If you are a baker you may want to save the whey runoff to use in your baking.